A huge country with a tiny population navigates the problems of modern development. 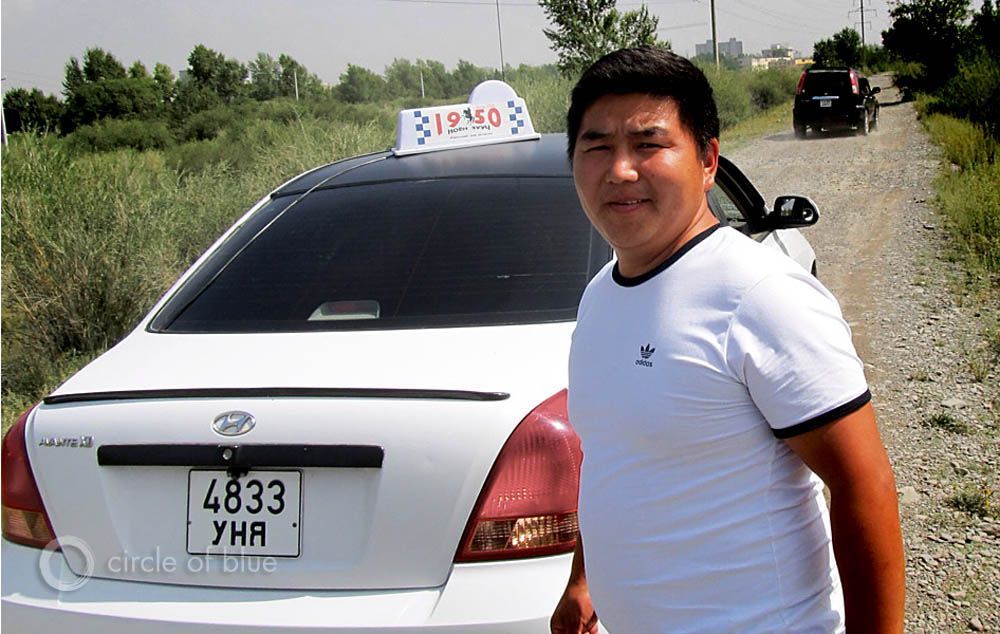 Photo © Keith Schneider / Circle of Blue
A taxi to the wild side in Ulaanbataar, capital of Mongolia. Click to see an enlarged image.

ULAANBATAAR — A hard rock and coal mining boom that really got rolling about a decade ago is literally leaving Mongolia’s capital in the dust. It’s also yielded 1) an aged Communist-era airport that is too small for the rapid rise in passenger traffic, and 2) monstrous traffic jams on the official two-lane highway leading from the airport to downtown.

Human ingenuity and need being what it is, Ulaanbataar’s taxi drivers developed a solution: a single lane bypass atop the levee that protects the city from the Tuul River’s springtime floods. On Thursday my taxi driver scooted off the jammed dirt and rock main highway onto the even more pitted and rough dirt and rock levee road. He rushed at near highway speeds past brush and old factories and waste dumps. Maybe five kilometers down the levee he stopped, stepped out of the car to open a white metal gate that led to an apartment complex parking lot, drove through, stepped out of the car to close the gate, and then wove through heavy traffic to deposit me at the entrance to the Puma Imperial Hotel. It’s an early 20th century brick and stucco homage to 70 years of Soviet influence — ornate cornices, big windows, and a bit in tatters.

“Welcome to Mongolia,” he said, grinning.

I am on assignment for Circle of Blue, reporting on the contest for Mongolia’s water between this nation’s nomadic livestock herders and the international mining companies that are consuming groundwater and polluting surface water to keep their operations in business. In most developing countries the contest is a mismatch as economic goals outcompete resource safety. 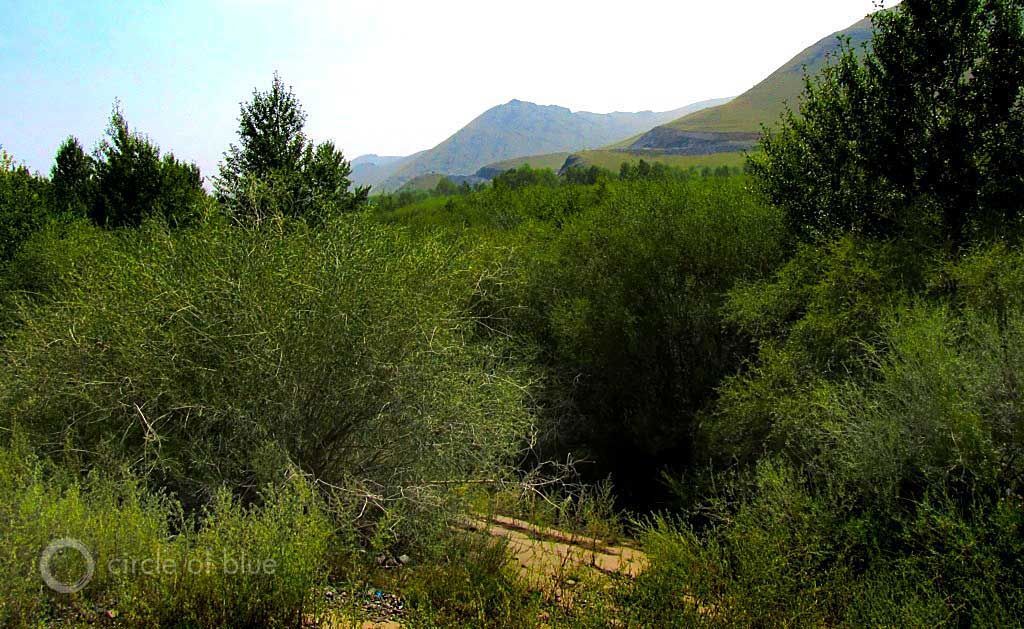 It’s not clear yet though whether that is the case in Mongolia. On Monday I leave Ulaanbataar to interview herders and mining executives in Mongolia’s south Gobi desert, where the world’s second largest copper mine just started producing copper concentrate for the market. Based on the interviews I’ve done in the capital, the herders and their allies in the domestic and international NGO community are doing a pretty good job pushing the government and the big mining companies to be much more careful in using water and land than they otherwise would be.

Much of that has to do with the magnificence of Mongolia’s natural treasury and the herding culture that makes its protection a national value. Mongolia has under 3 million residents living in a region of grasslands, steppes, mountains, deserts, and forests that is larger than Alaska. Forty percent of the country’s people are still tied to the land as nomads and herders managing a national livestock herd that numbers 40 million animals. The north is rich in water. The south is dry. And the grasslands to the east cover 69 million acres and support 2 million Mongolian gazelles, the third largest wild migrating herd in the world behind African wildebeest and North American caribou.

Outside of the capital city, Mongolia is one wild ass place. It’s been that way for centuries. The nomadic culture keeps the grazing animals moving, which also keeps the grass alive at the roots and perennially healthy. Herders have historically been so focused on the condition of their animals, the land, and the water that Mongolia established water protection standards as far back as the 13th century.

Enkhtuya Oidou, the Nature Conservancy’s Mongolia program director and an American-educated economist, told me today that Mongolia also lays claim to developing the world’s first national park in 1778, under the country’s religious leadership, to safeguard Bogd Khan mountain and the high forested mountain range that flanks Ulaanbataar’s southern boundary. Though history scholars in the U.S. could argue the point, that’s still almost a century before Yellowstone National Park was established by Congress in 1872. Yellowstone is commonly regarded as the world’s first national park. 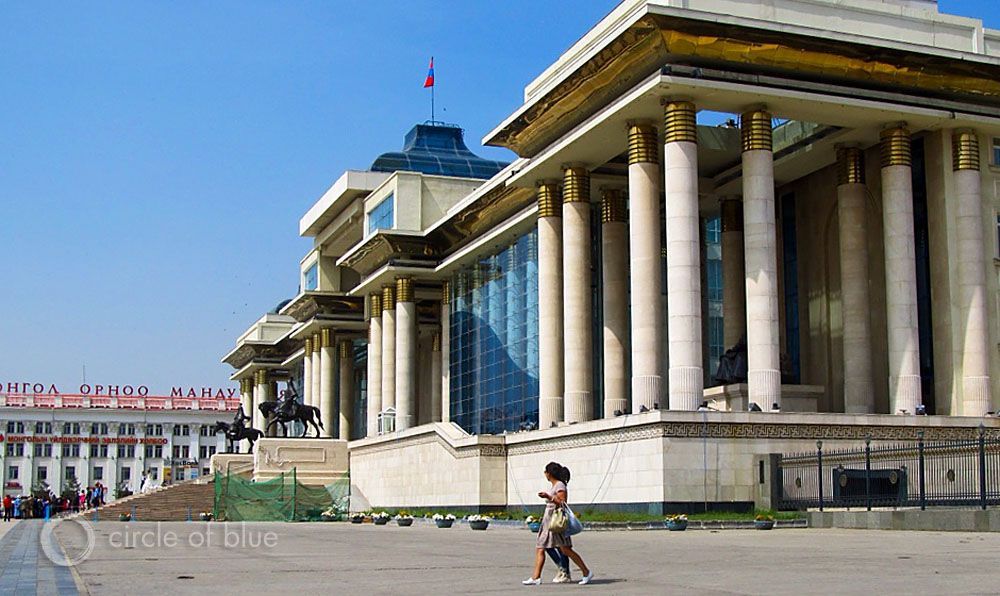 Photo © Keith Schneider / Circle of Blue
A pedestrian square in Ulaanbataar, capital of Mongolia. Click to see an enlarged image.

Inside the capital city, the streets are a rapidly changing mix of dusty streets, tattered Communist designed and built apartments, and steel office tower superstructures under construction and topped by sky cranes. Following the Soviet collapse in 1989 Mongolia went through a rugged economic transition shaped by free market reforms and economic pain. The first democratically elected government took office in 1990 — led by a president, prime minister, and a parliament. Gold mining emerged in the 1990s, followed by hard rock and coal mines. Those mines are now driving the country’s economy, which has been expanding rapidly.

In an interview today Orchibat Chuluunbat, the 55-year-old deputy minister for economic development and a veteran banker trained in the Soviet Union, said that mines and mine-related activity accounts for half of Mongolia’s $10 billion annual economy, and half of the $4 billion national government’s revenue. When I asked him about how much priority the government gives to managing the water used by the mines, Chuluunbat said that issue is gaining higher priority. He also said Mongolia needs to do a better job of quantifying national water supply, as well as water use by the mining industry.

He closed by noting that Mongolia needs more people. “We work hard to increase the population,” he said, smiling, “day…and night.”

Circle of Blue’s senior editor and chief correspondent based in Traverse City, Michigan. He has reported on the contest for energy, food, and water in the era of climate change from six continents. Contact
Keith Schneider

The Stream, August 12: Namibia Struggles With Drought
Scroll to top

Because these cookies are strictly necessary to deliver the website, you cannot refuse them without impacting how our site functions. You can block or delete them by changing your browser settings and force blocking all cookies on this website.

If you do not want that we track your visist to our site you can disable tracking in your browser here:

We also use different external services like Google Webfonts, Google Maps and external Video providers. Since these providers may collect personal data like your IP address we allow you to block them here. Please be aware that this might heavily reduce the functionality and appearance of our site. Changes will take effect once you reload the page.