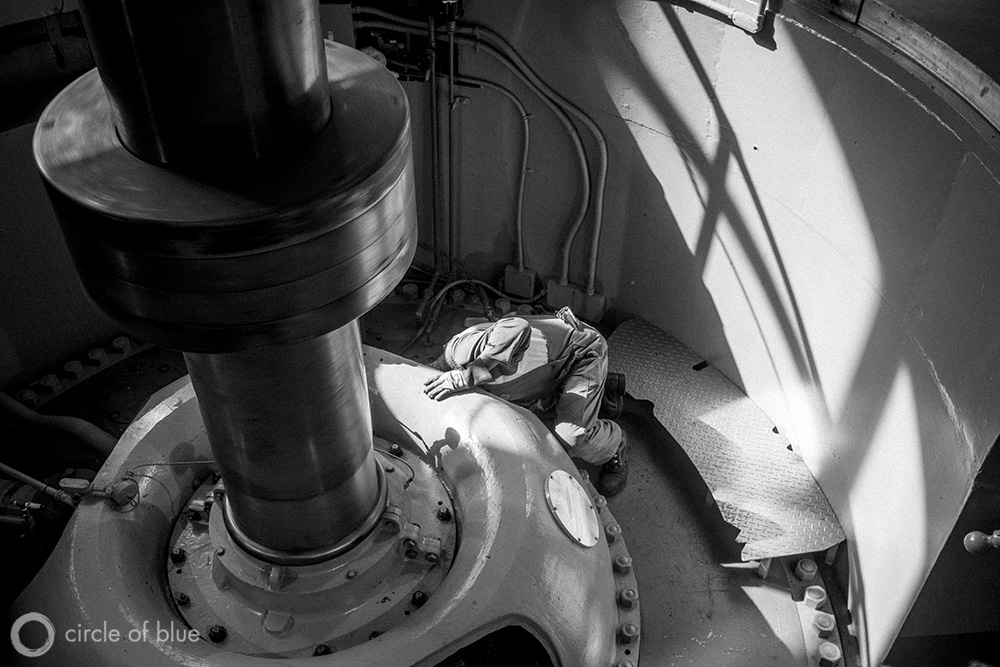 Photo © Matt Black
Abe Sanchez, a mechanic at the C.W. Jones Pumping Plant, looks for the source of a small water leak in one of the facility’s massive electrical pumps that pulls water out of the Sacramento-San Joaquin Delta. State and federal officials are trying to manage scarce water supplies to protect farmers, cities, fish, and ecosystems during California’s worst-ever drought. Click image to enlarge.

Update, April 22: Thanks to a wetter-than-average spring, state officials will send water to customers through the State Water Project canals. The allocation, which had been set at zero, will be five percent of normal, or 200,000 acre-feet.

State officials also said that rock barriers to help funnel salt water out of the Sacramento-San Joaquin Delta will not be immediately necessary. Instead, the Department of Water Resources will request that salinity standards be loosened in parts of the delta.

State and federal officials acknowledged Wednesday the extraordinary circumstances California faces as they unveiled a drought plan that will guide the state’s water management decisions through November.

The plan, which will be updated monthly as new weather and water data arrives, sets four priorities that will help the nation’s most populous state endure a historic drought:

In effect, the six water and wildlife management agencies that negotiated the plan must become master jugglers. The plan has near-term and longer-term milestones that will help set a clear organizational path.

“We need to continue to use every drop of water wisely and probably with more consideration than we ever have before.”

Near-term actions will take place in April and May, and they include finalizing both the river runoff forecast and water allocations from state and federal canals, determining whether temporary dams to block salt water will be necessary in the delta, and coordinating water deliveries to preserve a pool of cold water in key reservoirs.

The long view extends through the summer and into November. By then, the hottest part of the year, managers will be looking at emergency decisions to control salinity and to prevent fisheries from collapsing.

Above all, managers are keeping an eye on the calendar. In case sunny skies persist next year, they will hold back enough water to meet the plan’s four objectives in 2015.

“We must plan for a very dry 2014 and prepare for a potentially dry 2015,” said Mark Cowin, director of the California Department of Water Resources. “That means we need to continue to use every drop of water wisely and probably with more consideration than we ever have before.”

An exercise in crisis management, the plan does not propose legal changes or new investments. Those discussions are occurring elsewhere, as Governor Jerry Brown is pushing for better groundwater stewardship and state lawmakers are working on a multibillion-dollar water bond to send to the voters in November.

What to Expect: April and May

The plan released Wednesday was based on data available March 1.

A pivotal April 1 snow survey, which revealed snow reserves to be 32 percent of normal, and the river runoff forecast, due this week, were not included. The plan will be updated as new data are available.

“This is a framework, not a blueprint,” Cowin said.

Those two data points, the snow survey and the runoff forecast, will help the state determine whether it will revise how much water its doles out from the state canal system. Currently, the 29 agencies with a contract will get no water from the State Water Project.

Officials hinted that a wetter-than-average March may allow them to nudge up the allocation, but that it would still be paltry. Because contractors want to know where they stand and whether they need to buy water on the market, the state will make a final decision in the third week of April.

If the allocation remains at zero, most contractors have alternative sources available to meet health and safety needs: groundwater basins, local reservoirs, or water purchased on the market.

The plan defines health and safety as 55 gallons per person per day for drinking, bathing, and toilet flushing, plus water for fire protection. Lawn-watering is not included.

If dry conditions continue next year, the state estimates that up to 260,000 acre-feet, about half of what San Diego County uses annually, may be needed. For this, the state would tap supplies being held back in the reservoirs. Reclamation did not provide a 2015 estimate.

Some of the reserves will also be needed this summer to push salt water out of the delta. And if the runoff forecast is not strong enough, the Department of Water Resources will consider building temporary rock dams in the delta to block off slack backwaters and funnel the river, acting as a saltwater battering ram, toward San Francisco Bay.

“We will only move forward with barriers if we see them as absolutely necessary to meet critical needs,” said Cowin, who said the Department of Water Resources would seek permission from the state water board to allow the delta’s salt concentrations to rise above normal standards before deciding on the barriers.

A decision on the barriers, also used in the 1977 and 2009 droughts, is expected by the end of April. Construction would be completed by early June, and the barriers would be removed in November.

State and federal officials are also working with senior water rights holders in the Sacramento River Basin to delay their water deliveries from the spring to the summer. Doing so would help Chinook salmon runs by conserving cold water for the months when rivers are warmest and fish are at risk.

What to Expect: June to November

By the dog days of summer, California officials may be taking drastic measures, particularly for fish.

State and federal fisheries agencies will step up their monitoring and data collection. The U.S. Fish and Wildlife Service will increase stocks of endangered salmon species at its conservation hatchery near Shasta Dam.

In a worst case scenario, the fisheries agencies may move salmon out of withered streams to rivers in which temperature and flow conditions are better. Fish hatcheries are already trucking salmon downstream to help them reach the ocean.

“We are continuing to evaluate potential rescues of that species and relocating them into other habitat that they originally occupied but don’t currently occupy,” said Maria Rea of the National Oceanic and Atmospheric Administration Fisheries Service. “So all those actions are on the table and will be considered as we look at these improved forecasts.”

Now in the dry season, Californians may not know when the rains will come again, but at least they have an idea of what their water management agencies are thinking.

Chuck Bonham, director of the California Department of Fish and Wildlife, called the plan “an important milestone.”

“This is the first time we’ve been able to come out with one plan for our relevant agencies that will take us seven months out,” Bonham said.