Energy companies should provide better data on fracking water use, and investors should push for quantifiable water targets, according to a sustainable investing advocacy group. 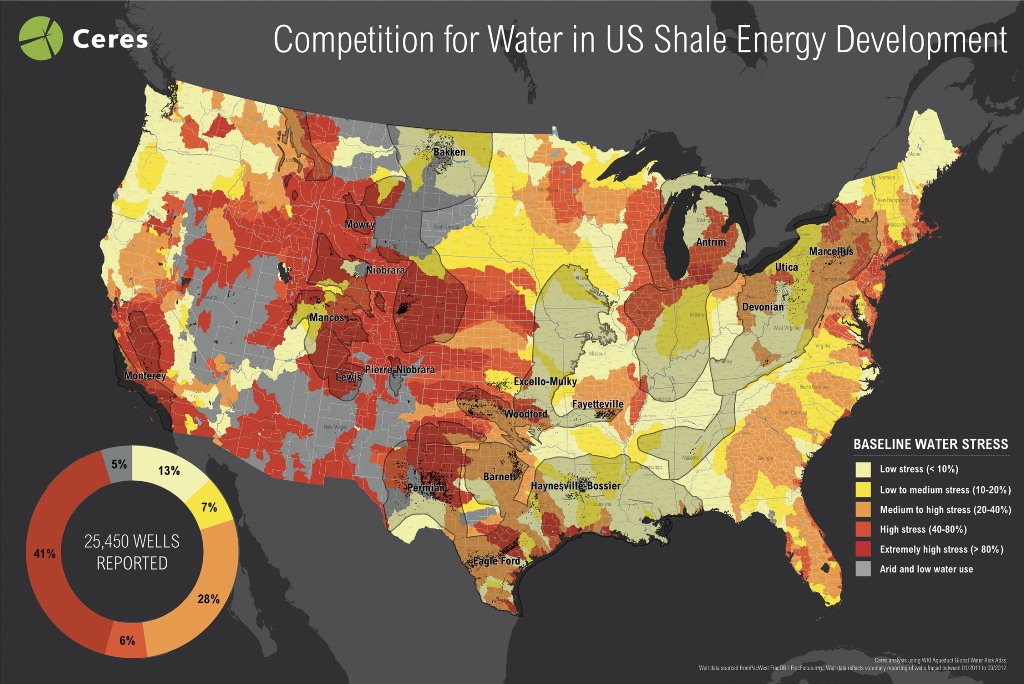 Image courtesy of Ceres
Hydraulically fractured shale regions are outlined in black and overlaid onto a map of U.S. river basins coded by water risk according to the World Resources Institute’s Aqueduct tool. River basins colored light yellow have low water stress; basins in dark red have extremely high stress. Almost half of fracked wells in the U.S. are in river basins with high or extremely high risk of water stress. Click image to enlarge.

Not even six years old, the energy boom in the United States has roiled rural towns and revived the country’s economic prospects. It has also shaken up long-established patterns of resource use, chiefly for water, thus adding a new source of demand in some of the country’s driest regions.

A report released last week maps the relationship between water stress and the unconventional oil and gas reserves that have pushed the boom, while outlining actions energy companies can take to improve resource management.

Nearly half of the wells drilled in the U.S. in recent years, 47 percent, are located in river basins with high or extremely high risk of water stress, according to the report from Ceres, a nonprofit that works with investors, businesses and credit rating agencies to identify environmental risks in business models.

Drilling rigs, America’s newest crop, have sprouted above shale formations across the country. They drill deep wells with horizontal shafts and then shoot jets of water, sand, and chemicals underground to crack open the stores of oil and gas trapped thousands of feet below. Called hydraulic fracturing, or fracking, this technique, along with horizontal drilling, has put the U.S. on a path toward being a net exporter of natural gas and the world’s top oil producer, briefly, by the end of the decade.

Ceres Recommends
The Ceres report recommends that energy companies be more forthright about their water use. Ceres encourages “across the board disclosure” of:
• The water sources used for fracking
• The amount withdrawn from each source
• The amount used for each fracture
• The amount of flowback and produced water
Companies should use this data, broken down by production region, to set quantifiable targets for water recycling and use of non-freshwater sources, Ceres argues.

The path, however, has hazards. Water risks, the Ceres report found, are particularly acute in Colorado, where 92 percent of wells have been drilled in areas of extremely high water stress.

In terms of quantity, Texas used the most water for fracking, more than three times as much as Pennsylvania, the second largest user.

“Investors at first were interested in water contamination and a lack of disclosure about the chemicals used, which might have affected a company’s social license to operate,” Freyman told Circle of Blue. “As the drought continues, more investors are asking how companies can increase the number of wells in arid areas.”

“This is not just about sustainability,” said Paul Bugala, an extractive industries analyst for Calvert Investments. “It’s about project viability.”

To understand fracking’s relationship with water stress, Freyman and co-author Ryan Salmon looked at two data sets. They gathered information on well location and water volumes used in fracking from the website FracFocus.org, a data clearinghouse run by the Groundwater Protection Council and the Interstate Oil and Gas Compact Commission.

Ceres plotted more than 25,000 shale gas and shale oil wells – nearly half of which were in Texas – that were registered with FracFocus between January 2011 and September 2012. Water used to frack these wells amounted to 246 million cubic meters (200,000 acre-feet), or enough water for the domestic needs of a city of 2.5 million people using 266 liters (70 gallons) per day. Because data submitted to the clearinghouse is voluntary, the reported figures are not comprehensive. Water sources, be they salty, fresh or recycled, are not disclosed either.

The FracFocus data was then laid on top of the water-risk maps developed by the World Resources Institute. A basin with “extremely high” water stress means that more than 80 percent of the available water is already claimed by cities, farmers, or industry.

For Ceres, open data is paramount for better resource and business management.

“Disclosure is the foundation,” said Mindy Lubber, Ceres president, at the organization’s annual conference in San Francisco on May 2. “You cannot connect the dots without this vital piece – information.”

Michael Webber, who studies the connections between water use and energy development at the University of Texas, preached the same message in testimony before a U.S. Senate committee a week earlier. FracFocus, though voluntary and imperfect, is the foremost central database for fracking’s water use. Webber told the committee members that the federal government, either the Energy Information Administration or the U.S. Geological Survey, should track this information.

“Disclosure is the foundation. You cannot connect the dots without this vital piece – information.”

Disclosure is welcomed, but regulators should use this information to create standards that are regionally specific, says Andrew Place.

Place works on energy and environmental policy for EQT, an energy company producing in Pennsylvania’s Marcellus shale formation, and he is the interim director of the Center for Sustainable Shale Development, a collaboration between industry and environmental groups that laid out voluntary performance standards in March for shale drilling in the Appalachian region.

Because the volume of water in rivers changes throughout the year, withdrawals during low flows might cause greater harm than during peak flows, Place said.

And certain locations see more demand from energy companies. In Johnson County, Texas, some 29 percent of water use in 2008 was for fracking. In the Eagle Ford shale formation in southern Texas, a young shale play, fracking, at its crest year, will account for between 5.2 percent and 89 percent of water use in six counties in the next decade, according to a University of Texas study.

So the challenge is to identify “a water risk for a specific time and place,” Place told Circle of Blue.

Investors – at least the group of 100 allied with the Ceres philosophy – crave better information. Paul Bugala of Calvert Investments, a member of the Ceres investor network, said that Calvert wants to see baseline information on water quality and water quantity before a fracking operation begins.

In April, Calvert filed a resolution with Pioneer Natural Resources, an energy company drilling mainly in Texas, through the U.S. Securities and Exchange Commission to encourage better disclosure of environmental risks, including water use. Calvert holds shares in Pioneer.

“Sometimes it takes investor pressure to get through to company management, so it is important for investors to speak up,” Bugala told Circle of Blue.

Southeastern Asset Management, which is not in the Ceres investor network and is one of the largest shareholders in Chesapeake Energy, a top producer of natural gas in the U.S., declined to comment on the report.

“Sometimes it takes investor pressure to get through to company management, so it is important for investors to speak up.”

Some industry groups do not see a problem with fracking’s water use. When asked via email if he thought the current regulatory, water-use reporting, and water acquisition structures in his state were adequate, Doug Flanders, spokesman for the Colorado Oil and Gas Association, wrote simply, “Yes.”

Flanders pointed out that Colorado – a high water-risk state according to the Ceres report – requires oil and gas companies to submit a detailed water-use report and that all water must be obtained by purchasing or leasing existing water rights, municipal effluent, or groundwater.

The water risk report is one piece of a broader Ceres project on fracking. Freyman said that later this summer the organization will release a report that compares water disclosure policies for companies involved in fracking and outlines the states where new fracking regulations are expected.

The goal of all this is to find how water fits in America’s new energy economy.

“Industry is able to outbid farmers for water, which is fine,” Freyman said. “But there is a need for management with local interests. We need a conversation about how society values water – the costs and the benefits and how to sell it and allocate it.”

California Farms Use How Much Water? Nobody Really Knows